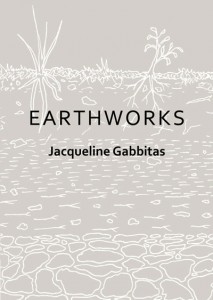 ‘This wonderful sequence of poems cuts into the earth beneath the thin layer of soil to articulate a voice that knots life to death. Gabbitas’s language is vital, visceral, having its effect directly in our body. The poetics of direct speech and the richness of vocabulary brings the reader in contact with the raw reality of life. This is profoundly moving poetry that repays re-reading and bearing close to the heart.’ – Sharon Morris

…The direct, bald and careful style of Jacqueline Gabbitas’s poems quickly announces they have no time for decorative, wordy business, and instead prioritize the nut of the idea, the thing. Earthworks describes a pagan harshness to landscape, but with frankness, and none of the forced poetic mysticism too often found in poems about the natural world. There are reservoirs, deer shelters, minerals and buried birds, and these things are treated unsentimentally, are leant against human dramas, as in ‘Bird Buried’. Her poems have the bedside manner of someone who understands the gravity of death, big sadness, a bit of geology even, but is also used to breaking bad news. These are skillful and easy poems that underplay their music and profundity. – Jack Underwood, Poetry London (no.75), Summer 2013

In Earthworks, Jacqueline Gabbitas delves into earth and soul, finding each in each. It’s an attractive pocket-sized volume with smooth grey covers bearing Martin Parker’s patterned design of earth’s layers (what lies beneath the surface, and what bursts through). These are the layers Gabbitas introduces in her first poem, ‘Overlaid’, delighting in specialised vocabulary.

Above soil level, she takes us on explorations of nature. In ‘Damflask’, we find ‘‘chub’’, ‘‘pike’’, ‘‘heron’’, ‘‘horseshoe bats’’, creatures nurtured by the reservoir, as well as learning of the water’s shocking destructive power:

But the level of water alarmed us – they call it
hochwasser in Germany as if it’s a holy thing.
Nests in the embanked trees were almost pike food,
and anything below them crazed. Broken.

This theme of the earth’s power both to heal and destroy (often expressed with a sense of urgency) recurs throughout, along with a fascination with meetings of life and death, and elemental change. As well as in earth and water, Gabbitas rejoices in fire, her language burning in ‘Handfast Fire’ (where the shape of the poem on the page (especially when held sideways) leaps like the flames themselves), and ‘April End (Beltane)’.

She has the gift of building powerful visual images, as in the evocative and moving ‘The Padfield Horse’. Her enjoyment of language, playing with meanings (‘Lappen’), poetic form (‘High Hills’), and dialect (‘I’ve no soul to tell you on’, and ‘Wood & Stone’) is infectious.

The pamphlet is a celebration of earth and all it holds. Her closing poem, ‘Stigmaria’, describing a fossilised root, seals its warmth and generosity:

It’s there always, a kind of reassurance,
this beautiful grey root. It will be lifted,
dusted, placed back with love, a history
of love, a simple needing of its presence,
and looked at everyday.